The life and adventures of the Ingalls family in the 19th century American West.

This award-winning family drama was based upon Laura Ingalls Wilder’s 9-part series of autobiographical books. Television producer and NBC executive Ed Friendly became aware of this enduring story in the early 1970s. He asked Michael Landon to direct the pilot movie, who agreed on the condition that he could also play Charles Ingalls. 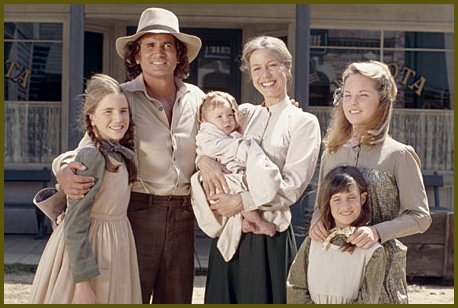 PLACE: the American frontier – more specifically, Walnut Grove in the state of Minnesota.

Charles/Pa Ingalls: a homesteader farmer/woodworker; compassionate and loving, yet quick-tempered and ready to throw a defensive punch whenever necessary.

Laura Ingalls Wilder: The winsome, tomboyish second daughter of Charles and Caroline, who serves as the voice of the entire series, and eventually married Almanzo Wilde.

Mary Ingalls Kendall: Charles and Caroline’s pretty and ultra-responsible oldest daughter, who longs to be a teacher and goes completely blind at the age of 15. She later marries Adam Kendall.

Carrie Ingalls: The cute third daughter of Charles and Caroline, who didn’t have a large role but was always portrayed as a very sweet little girl.

Grace Ingalls: Charles and Caroline’s fifth and final child, who was only about 4 when her role in the series ended.

Jack: the loyal, lovable family dog, who was replaced by Bandit when he died in Season 4.

Albert Quinn Ingalls: The fictional adopted son of Charles and Caroline–an orphaned runaway whom the Ingalls meet while living temporarily in Winoka.

James Cooper Ingalls: The fictional adopted son of Charles and Caroline, who comes to live with them after the death of his parents.

Cassandra Cooper Ingalls: The fictional adopted daughter of Charles and Caroline, and the younger sister of James Supporting characters include.

Mr. Isaiah Edwards: The mountain-man/drifter-turned-farmer who settled in Walnut Grove, who had a drinking problem and, despite his happy-go-lucky exterior, had a lot of emotional turmoil in his life.

John Sanderson Edwards: the oldest adopted son of Isaiah and Grace, who lives with them after the death of his widowed mother, and becomes a writer.

The Story of Black People in America by Mr.Nancy