Fledgling writer Briony Tallis, as a 13-year-old, irrevocably changes the course of several lives when she accuses her older sister’s lover of a crime he did not commit. Based on the British romance novel by Ian McEwan.

Director: Joe Wright
Writers: Ian McEwan (novel), Christopher Hampton (screenplay)
Stars: Saoirse Ronan, Brenda Blethyn, James McAvoy
Plot: When Briony Tallis, 13 years old and an aspiring writer, sees her older sister Cecilia and Robbie Turner at the fountain in front of the family estate she misinterprets what is happening thus setting into motion a series of misunderstandings and a childish pique that will have lasting repercussions for all of them. Robbie is the son of a family servant toward whom the family has always been kind. They paid for his time at Cambridge and now he plans on going to medical school. After the fountain incident, Briony reads a letter intended for Cecilia and concludes that Robbie is a deviant. When her cousin Lola is raped, she tells the police that it was Robbie she saw committing the deed. 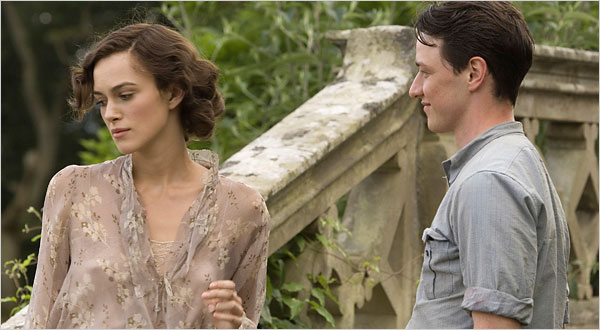