An artificially intelligent PC and his human owner find themselves in a romantic rivalry over a woman.

Director: Steve Barron
Writer: Rusty Lemorande
Stars: Lenny von Dohlen, Virginia Madsen, Maxwell Caulfield
Plot : The story opens with Miles Harding (Von Dohlen), an architect who envisions a brick shaped like a jigsaw puzzle piece that could enable buildings to withstand earthquakes. Seeking a way to get organized, he buys a home computer (made by the fictitious company Pinecone Computers) to help him develop his ideas. Although he is initially unsure that he will even be able to correctly operate the computer, he later buys numerous extra gadgets that were not necessary for his work, such as switches to control household appliances like the blender, a speech synthesizer, and a microphone. The computer (Cort) addresses Miles as “Moles”, because Miles mistyped his name during the initial set-up.

When Miles attempts to download data from a mainframe computer at work, the computer begins to overheat. In a state of panic, Miles pours a nearby bottle of champagne over the machine, which then becomes sentient.

The remainder of the movie deals with a love triangle between Miles, his computer (which identifies its own name as “Edgar” at the end of the movie), and Miles’ neighbor, an attractive cellist named Madeline (Madsen). Edgar composes a piece of music for Madeline after hearing her practicing through an air vent that connects the two apartments. She believes that Miles composed the piece and begins to fall in love with him. Edgar responds with jealousy, canceling Miles’ credit cards and registering him as an “armed and dangerous” criminal.

Miles shoves the computer and tries to unplug it, getting an electric shock. Then the computer retaliates by harassing him with household electronics.

Eventually, Edgar accepts Madeline and Miles’ love for each other, and appears to commit suicide by sending a large electric current through its acoustic coupler, around the world, and back to itself. In the final scene, a pop song (“Together in Electric Dreams”) written by Edgar as a tribute to Miles and Madeline plays on radio stations around the United States. 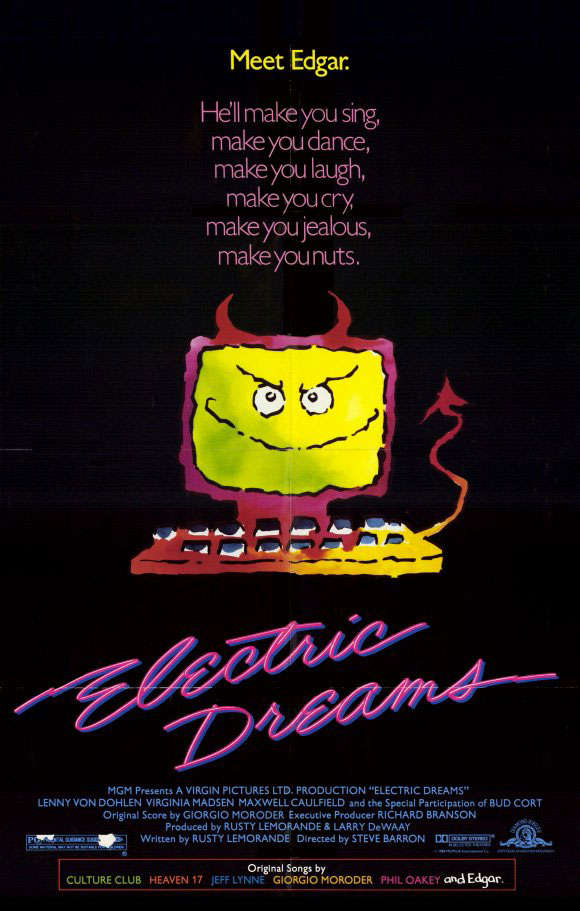