The life of a simple bookshop owner changes when he meets the most famous film star in the world.

Plot: Every man’s dream comes true for William Thacker, an unsuccessful Notting Hill bookstore owner, when Anna Scott, the world’s most beautiful woman and best-liked actress, enters his shop. A little later, he still can’t believe it himself, William runs into her again – this time spilling orange juice over her. Anna accepts his offer to change in his nearby apartment, and thanks him with a kiss, which seems to surprise her even more than him. Eventually, Anna and William get to know each other better over the months, but being together with the world’s most wanted woman is not easy – neither around your closest friends, nor in front of the all-devouring press. 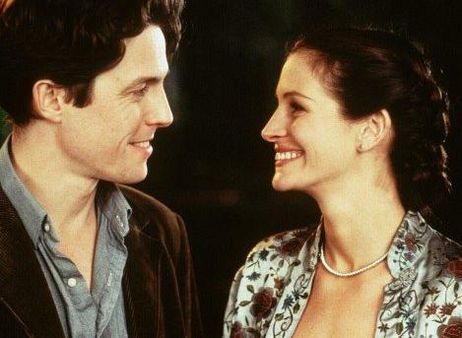 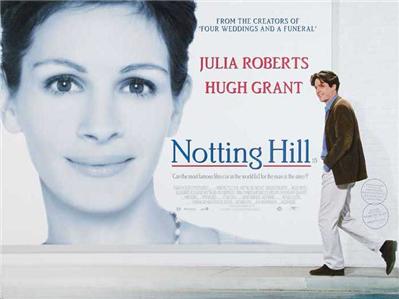 Memorable quotes from the “Notting Hill”

William: I live in Notting Hill. You live in Beverly Hills. Everyone in the world knows who you are, my mother has trouble remembering my name.
Anna Scott: I’m also just a girl, standing in front of a boy, asking him to love her.

Anna Scott: You know what they say about men with big feet.
William: No, I don’t, actually. What’s that?
Anna Scott: Big feet… large shoes.

P.R. Chief: Dominic… if you’d like to ask your question again?
Journalist: Yes. Anna, how long are you intending to stay here in Britain?
Anna Scott: [pause] Indefinitely.

Keziah: No thanks, I’m a fruitarian.
Max: I didn’t realize that.
William: And, ahm: what exactly is a fruitarian?
Keziah: We believe that fruits and vegetables have feeling so we think cooking is cruel. We only eat things that have actually fallen off a tree or bush – that are, in fact, dead already.
William: Right. Right. Interesting stuff. So, these carrots…
Keziah: Have been murdered, yes.
William: Murdered? Poor carrots. How beastly!

William: It’s as if I’ve taken love heroin, and now I can’t ever have it again.

Anna Scott: Can I stay for a while?
William: You can stay forever.

Spike: There’s something wrong with this yogurt.
William: Ah, that’s not yogurt, that’s mayonnaise…
Spike: Ah, right-o then.
[continues to eat it]

William: So how is he?
Anna Scott: I don’t know. It just got to the point where I couldn’t remember any of the reasons why we were together.

Spike: Bugger this for a bunch of bananas.

Bernie: What’s the pay like in movies? I mean. Last movie. How much did you get paid?
Anna Scott: 15 million dollars.

William: Max, this is Anna.
Max: [Smiles politely and shakes hands with Anna] Hello Anna
[Suddenly comes to a realisation as to whom Anna is] Max: Scott!

P.R. Chief: Next question? Yes. You in the pink shirt.
William: Uh, right. Miss Scott, are there any circumstances that you and he might be more than just friends.
Anna Scott: I hoped that there would be but I’ve been assured that there’s not.
William: Yes, but what if…
P.R. Chief: I’m sorry. Just the one question.
Anna Scott: No. It’s alright. You were saying?
William: I was just wondering what if this person…
Journalist: Thacker. His name is Thacker.
William: Right. Thanks. What if, uh, Mr. Thacker realized that he had been a daft prick and got down on his knees and begged you to reconsider if you would… indeed… reconsider.
Anna Scott: [pause] Yes. I believe I would.
William: That’s wonderful news. The readers of Horse and Hound will be relieved.

This site uses Akismet to reduce spam. Learn how your comment data is processed.

Life between the Dots

" When you love what you do, The world pays attention "

Made in Galle with ❤