On June 5th, 2012, Venus will pass across the face of the sun, producing a silhouette that no one alive today will likely see again.

Transits of Venus are very rare, coming in pairs separated by more than a hundred years. This June’s transit, the bookend of a 2004-2012 pair, won’t be repeated until the year 2117. Fortunately, the event is widely visible. Observers on seven continents, even a sliver of Antarctica, will be in position to see it.

The nearly 7-hour transit begins at 3:09 pm Pacific Daylight Time (22:09 UT) on June 5th. The timing favors observers in the mid-Pacific where the sun is high overhead during the crossing. In the USA, the transit will be at its best around sunset. That’s good, too. Creative photographers will have a field day imaging the swollen red sun “punctured” by the circular disk of Venus.

Observing tip: Do not stare at the sun. Venus covers too little of the solar disk to block the blinding glare. Instead, use some type of projection technique or a solar filter. A #14 welder’s glass is a good choice. Many astronomy clubs will have solar telescopes set up to observe the event; contact your local club for details.

Transits of Venus first gained worldwide attention in the 18th century. In those days, the size of the solar system was one of the biggest mysteries of science. The relative spacing of planets was known, but not their absolute distances. How many miles would you have to travel to reach another world? The answer was as mysterious then as the nature of dark energy is now.

Venus was the key, according to astronomer Edmund Halley. He realized that by observing transits from widely-spaced locations on Earth it should be possible to triangulate the distance to Venus using the principles of parallax.

The idea galvanized scientists who set off on expeditions around the world to view a pair of transits in the 1760s. The great explorer James Cook himself was dispatched to observe one from Tahiti, a place as alien to 18th-century Europeans as the Moon or Mars might seem to us now. Some historians have called the international effort the “the Apollo program of the 18th century.”

Viewing with Protection — Experts suggests that one widely available filter for safe solar viewing is number 14 welder’s glass. It is imperative that the welding hood houses a #14 or darker filter. Do not view through any welding glass if you do not know or cannot discern its shade number. Be advised that arc welders typically use glass with a shade much less than the necessary #14. A welding glass that permits you to see the landscape is not safe. Inexpensive Eclipse Shades have special safety filters that appear similar to sunglasses, but these filters permits safe viewing. Eclipse shades are available through retailers listed at http://www.mreclipse.com/Totality/TotalityApC.html under “Solar Filters.”

Telescopes with Solar Filters — The transit of Venus is best viewed directly when magnified, which demands a telescope with a solar filter. A filtered, magnified view will clearly show the planet Venus and sunspots (http://skyandtelescope.com/observing/objects/sun/article_101_1.asp). Never look through a telescope without a solar filter on the large end of the scope. And never use small solar filters that attach to the eyepiece (as found in some older, cheaper telescopes.) See “Solar Filters” as cited above for retailers.

Pinhole projectors — These are a safe, indirect viewing technique for observing an image of the Sun. While popular for viewing solar eclipses, pinhole projectors suffer from the same shortcomings as unmagnified views when Venus approaches the edges of the Sun. Small features like the halo around Venus will not likely be discernible. Pinhole projectors and other projection techniques are at http://solar-center.stanford.edu/observe/.

Related projection methods — One viewing technique is to project an image of the Sun onto a white surface with a projecting telescope. http://www.skyandtelescope.com/observing/objects/sun/Solar_Projection.html and http://www.astrosociety.org/education/publications/tnl/05/stars2.html. Others follow:

A double transit: the International Space Station and Venus on June 8, 2004. Photo courtesy of Tomas Maruska. In retrospect, the experiment falls into the category of things that sound better than they actually are. Bad weather, primitive optics, and the natural “fuzziness” of Venus’s atmosphere and other factors prevented those early observers from gathering the data they needed. Proper timing of a transit would have to wait for the invention of photography in the century after Cook’s voyage. In the late 1800s, astronomers armed with cameras finally measured the size of the Solar System as Edmund Halley had suggested.

This year’s transit is the second of an 8-year pair. Anticipation was high in June 2004 as Venus approached the sun. No one alive at the time had seen a Transit of Venus with their own eyes, and the hand-drawn sketches and grainy photos of previous centuries scarcely prepared them for what was about to happen. Modern solar telescopes captured unprecedented view of Venus’s atmosphere backlit by solar fire. They saw Venus transiting the sun’s ghostly corona, and gliding past magnetic filaments big enough to swallow the planet whole.

2012 should be even better as cameras and solar telescopes have improved. Moreover, NASA’s Solar Dynamics Observatory is going to be watching too. SDO will produce Hubble-quality images of this rare event.

The passage of Venus in front of the Sun on June 6 will be visible in its entirety in the Arctic areas as well as in eastern parts of Asia and Australia.

However, Sri Lankans would see only the latter part of it for the transit begins around 3.39 a.m. Sri Lanka standard time, before the sunrise.

The Venus transit will be visible to Sri Lanka from about 6.00 a.m. on Wednesday with the sunrise, greatest of transit at 7.03 a.m. and the transit ends at 10.22 am. 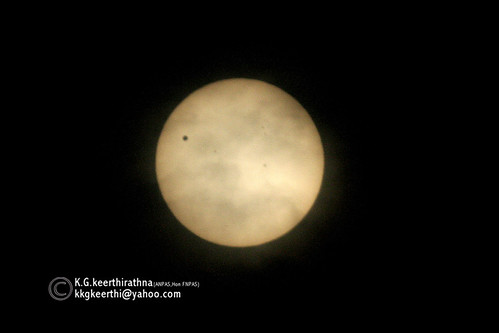 The 2012 Transit of Venus seen from Sri Lanka (8.38 AM 2012-06-06 )
Captured by Keerthirathna Kariyawasam Gamhewage (Professional Photographer)