In turn-of-the-century Vienna, a magician uses his abilities to secure the love of a woman far above his social standing. 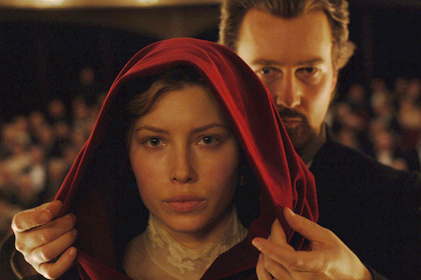 Director: Neil Burger
Writers: Neil Burger, Steven Millhauser (short story “Eisenheim the Illusionist”)
Stars:Edward Norton, Jessica Biel and Paul Giamatti
Plot: In late nineteenth century Vienna, renowned illusionist Eisenheim is reunited with the Duchess von Teschen when she is volunteered from the audience to participate in an illusion during one of his performances. Despite having not seen each other in fifteen years when they were teenagers, they almost immediately recognize each other as Eduard Abramovich and Sophie von Teschen, they who had a doomed romance at that time due to their class differences. The Duchess is soon to be wed to the Crown Prince Leopold in what would be for him a marriage solely in pursuit of power: overthrowing his father, the Emperor Leopold, as well as overtaking the Hungarian side of the empire. The Crown Prince is known to use violence against women if it suits his needs or purposes. As such, the Duchess, who realizes that she still loves Eisenheim and he her, can never leave the Crown Prince without it jeopardizing her life…

Memorable quotes for The Illusionist

[first lines]
woman in audience: It’s her. I know it’s her! She wants to tell us something.

Eisenheim: Everything you have seen here has been an illusion.

Chief Inspector Uhl: Promise me you won’t do it again.
Eisenheim: I promise you you’ll enjoy this next show.

Crown Prince Leopold: I want you to put and end to it.

Chief Inspector Uhl: In the name of his Imperial Majesty in the city of Vienna, I hearby arrest Edward Abramovich, also known as Eisenheim The Illusionist, on charges of disturbing public order, charlatanism and threats against the empire.

Chief Inspector Uhl: As a boy, I’m told, he had a chance encounter with a travelling magician. One version of the story was that the man himself vanished… along with the tree. People began to think he had some sort of special power… or at least that he was a bit different. And then he met her.

Josef Fischer: Life and death. Space and time. Fate and chance. Theses are the forces of the universe. Tonight, ladies and gentlemen, I present to you a man who has unlocked these mysteries. From the furthest corners of the world where the dark arts still hold sway he returns to us to demonstrate how nature’s laws may be bent. I give you Eisenheim.

Eisenheim: i thought we might end this evening with a discussion of the soul. All of the greatest religions speak of the soul’s endurance before the end of life. So what then does it mean to die?

Eisenheim: My intention has only been to entertain, nothing more.

Chief Inspector Uhl: [pacing] Eisenheim, I don’t want to arrest you. I’m a cynical man, God knows… but if your manifestations are somehow real… then even I’m willing to admit, you’re a very special person. And if it’s a trick, then it’s equally impressive. Either way, you have a gift. So don’t make me put you in jail!

Young Eisenheim: [When showing Young Sophie the locket he made for her] There’s a secret way to open it.

Eisenheim: Do you know me?
Sophie: No.
Eisenheim: Are you quite certain that we’ve never met?
Sophie: Yes, of course.

Eisenheim: [Angrily] Are you completely corrupt?
Chief Inspector Uhl: No, not completely, which is why I’ll advise you not to accuse anyone.

Eisenheim: Why don’t you leave him?
Sophie: It’s not that easy.

Chief Inspector Uhl: You don’t know that.
Eisenheim: No. But you do.

Crown Prince Leopold: He has tricked you, it is all an illusion!
Chief Inspector Uhl: Perhaps there is truth in this illusion.

Sophie: What did you do to him?
Eisenheim: I gave him what he asked for.
Sophie: What possessed you to do something so foolish?

Chief Inspector Uhl: What do you want?
Eisenheim: Nothing.

Chief Inspector Uhl: Then why are you doing this?
Eisenheim: To be with her.

Eisenheim: I was meant to return… I just… I kept thinking I’ll find around the next corner…
Sophie: What?
Eisenheim: A real mystery. I saw remarkable things but the only mystery I never solved was… why my heart couldn’t let go of you.

Eisenheim: From the moment we enter this live we are in the flow of it. We measure it and We mock it, but we cannot defy it. We cannot even speed it up or slow it down. Or can we? Have we not each experienced the sensation that a beautiful moment seemed to pass to quickly, and wished that we could make it linger? Or felt time slow on a dull day, and wished that we could speed things up a bit?

Sophie: Then why did you speak to me? Why did you even bother talking…
Eisenheim: [goes forward and passionately kisses her]

[last lines]
[the illusionist’s voice in the inspector’s memory]
Eisenheim: Everything you’ve seen is an illusion, it’s a trick.

Chief Inspector Uhl: As a boy, I’m told, he had a chance encounter with a traveling magician.
Traveling Magician: Boy!
Chief Inspector Uhl: One version of the story was that the man himself then vanished. Along with the tree! Who knows what actually happened.