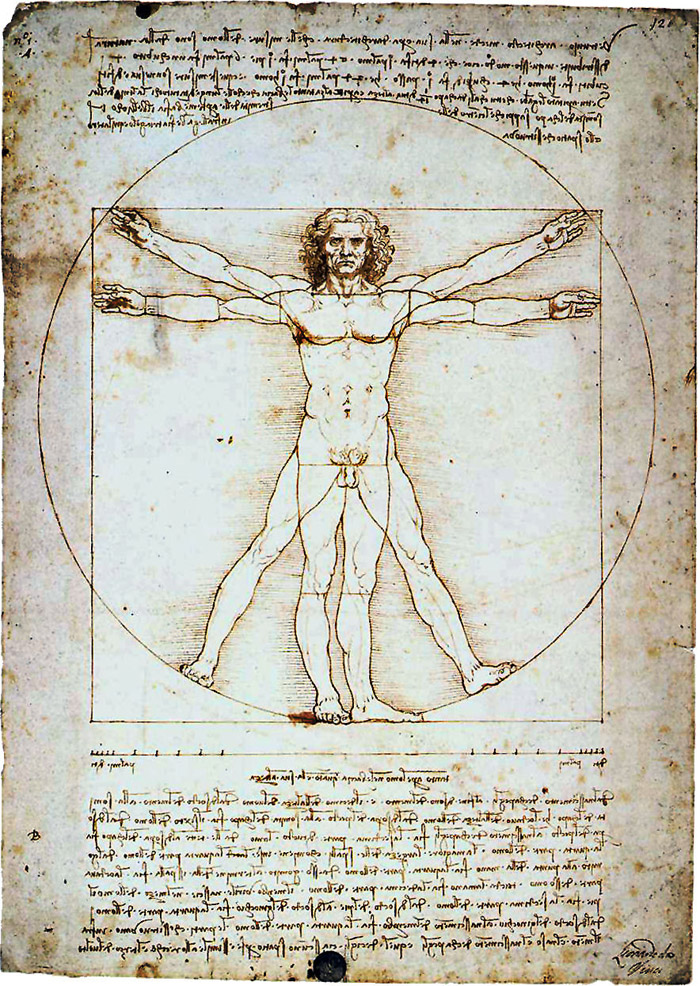 The Vitruvian Man is a world-renowned drawing created by Leonardo da Vinci circa 1487. It is accompanied by notes based on the work of the famed architect, Vitruvius. The drawing, which is in pen and ink on paper, depicts a male figure in two superimposed positions with his arms and legs apart and simultaneously inscribed in a circle and square. The drawing and text are sometimes called the Canon of Proportions or, less often, Proportions of Man. It is stored in the Gallerie dell’Accademia in Venice, Italy, and, like most works on paper, is displayed only occasionally.

The drawing is based on the correlations of ideal human proportions with geometry described[4] by the ancient Roman architect Vitruvius in Book III of his treatise De Architectura. Vitruvius described the human figure as being the principal source of proportion among the Classical orders of architecture. Leonardo’s drawing is traditionally named in honor of the architect.

The first paragraph of the upper part reports Vitruvius: “Vetruvio, architect, puts in his work on architecture that the measurements of man are in nature distributed in this manner, that is:

and these measurements are in his buildings”. The second paragraph reads: “if you open your legs enough that your head is lowered by one-fourteenth of your height and raise your hands enough that your extended fingers touch the line of the top of your head, know that the center of the extended limbs will be the navel, and the space between the legs will be an equilateral triangle”.
The lower section of text gives these proportions:

One of the questions of philosophers, theologians and mathematicians throughout history is how to “square the circle”. In other words, how to find a relationship between spirit and matter, between God and man?

A movie called The “Da Vinci Code[2006]” is a  based on mystery-detective novel written by Dan Brown. It follows symbologist Robert Langdon and Sophie Neveu as they investigate a murder in Paris’s Louvre Museum and discover a battle between the Priory of Sion and Opus Dei over the possibility of Jesus having been married to Mary Magdalene. The title of the novel refers to, among other things, the fact that the murder victim is found in the Grand Gallery of the Louvre, naked and posed like Leonardo da Vinci’s famous drawing, the Vitruvian Man, with a cryptic message written beside his body and a pentacle drawn on his chest in his own blood.